Apple Music, Google Play Music and Amazon Music are all on board for the new Frankie V single 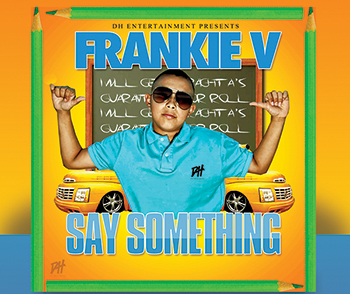 “Say Something!” ties in to Frankie Vs Back to School Campaign centered on inspiring other kids to study hard and get an education. Frankie Vs summer release is coordinated by Guion Partners, Inc. (GPI), a Los Angeles based management firm lead by Lindsay Guion, an industry professional best known for his work with Grammy Awardwinning and multi-Platinum recording artists Ginuwine, Mya and DAngelo.

We at GPI are excited to work with Frankie V. It’s rare to find a young artist with the next-level- performance of this special talent. We look forward to continuing work with him as he grows in all aspects, says Lindsay Guion.

Frankie V is a 12-year old Hip-Hop sensation and versatile talent on the rise. As a Hip-Hop recording artist, he is poised with character, exciting delivery and swagger. He focuses on lyrics with a positive message in the world of Hip-Hop. His influences include Meek Mill, the Game and TI. Frankie V embraces his education as a top priority, and fueled by his mother and father’s demand for excellence.

With his parents, family and friends encouragement and his own perseverance, Frankie V is moving steadily and rapidly growing his fan-base as one of Hip Hops brightest and entertaining New Young Stars. As a gifted recording artist, Frankie V has worked both live and in studio with top musical artists. He has opened for celebrity artists such as: Rick Ross, YG, French Montana, Kid Ink and Yo Gotti.