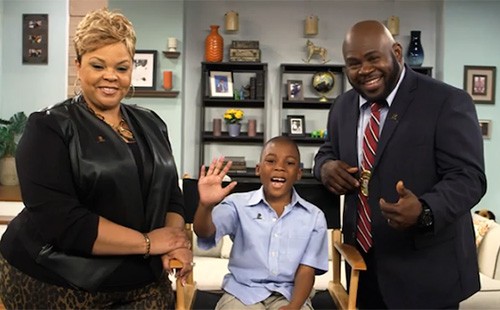 The Manns co-hosted the 30th Annual Stellar Gospel Music Awards and received the St. Jude Star award, which recognizes individuals in the entertainment industry whose fundraising and awareness efforts have resulted in significant contributions to the hospital. The singing and acting duo lent their celebrity status to help garner $1.4 million in cash and pledges for the Radio Cares for St. Jude national radio broadcast event and volunteered their time to host and perform during the St. Jude Celebration of Hope closing dinner.

Their most recent support includes a public service announcement video aimed at raising awareness for St. Jude filmed on the set of the Manns’ new original Bounce TV series “Mann & Wife,” which premieres Tuesday, April 7 at 9 p.m. (8 p.m. CT). Bounce TV, the nation’s first-ever and fastest-growing broadcast television network designed for African-American audiences, airs on the digital signals of local television stations. The 30-second PSA, features St. Jude patient Martavion, an outspoken 7-year-old who began treatment at St. Jude for sickle cell disease shortly after his birth. Even while facing this chronic illness, his personality is free-spirited and outgoing. He has never met a stranger, is a car enthusiast and loves playing outside with his cousins.

Thanks to the support of friends like the Manns, St. Jude families never receive a bill for treatment, travel, housing or food – because all a family should worry about is helping their child live.

To view the PSA, clickÂ here.