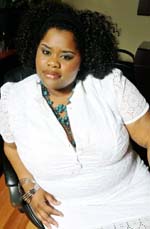 The community loan fund will present opportunities for impact investing in the support and expansion of rural food systems in Alabama’s Black Belt, both for financial institutions and individual investors.

The Black Belt is a rural farming area consisting of almost two dozen contiguous counties where most of Alabama’s local food is produced. ECN’s Community Loan Fund Initiative is the first project to target support for food production and distribution in the Black Belt.

The Ford Foundation began funding ECN’s rural wealth creation plans in 2010 to implement ECN’s goal of connecting emerging leaders in Alabama, first to each other, then back to their communities. “We now have a network of activists who can stay involved with their home or adopted communities, even if they have moved from the area,” Ms. Norwood said.

“The great tragedy for rural underserved communities is that they lose so many young local activists as they become young adults. Emerging leaders who once could have stayed and established continuity and growth are now moving away to find jobs. Yet our emerging leaders tell us there is a longing to improve the communities that nurtured them and made them what they are today,” she said.

“ECN was created in 2007 to identify and connect those emerging leaders to their communities and to each other, as well as to share strategies for local support and problem solving. Thanks to the Ford Foundation and our community partnerships, ECN is a force for progress, both for the region and for its emerging leaders,” Ms. Norwood said.

Jessica Norwood is a political consultant who has managed campaigns at the federal, state, and local levels. Following Hurricane Katrina, she founded the Emerging Changemakers Network in 2007 to organize native professionals and activists and re-patriate them with their home communities through local leadership initiatives.

The Credit Bros, Who Have Helped 250 Families Become Homeowners, Are Back With A Free New Tool

Is There A Black Corporate America?”