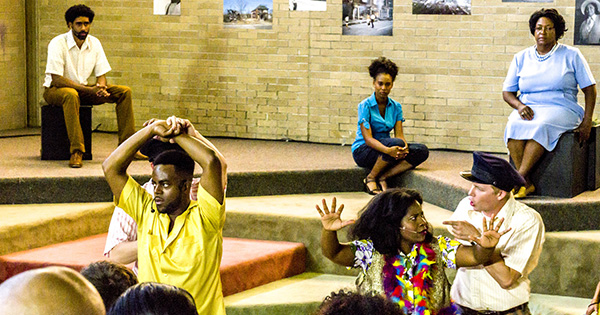 Chicago, IL (BlackNews.com) — A play chronicling the untold story of women and girls in the 1967 Detroit rebellion is making its way to Chicago for special performances this month.

AFTER/LIFE: In Honor of the City Rising from the Ashes debuted in Detroit last year to commemorate the 50th anniversary of the rebellion “from the perspective of the thousands of overlooked women and girls who rose up to burn their city down.” It will run June 15-17, 2018, as part of Perform Midwest at Links Hall, 3111 N. Western Avenue, Chicago.

“I’m so pleased to bring this story to Chicago,” said Dr. Lisa Biggs, a Michigan State University professor who, with her students, wrote the play. The play is supported by grants from the John S. and James L. Knight Foundation and the University of Michigan’s Humanities Without Walls program.

She conceived the play, Biggs explained, because “I was struck by the silence around women and girls involvement. In ’67, they were pictured right alongside the men and boys on the streets. They put their bodies on the line, but from many written accounts you would never know it. I hope AFTER/LIFE can better represent the past and create opportunities for audience members to dream of a more fair, just and equitable future.”

In July 1967, Detroit residents in largely African-American neighborhoods squared off against the city’s largely white police department in a five-day confrontation that resulted in the deaths of 43 people (33 African-American and 10 white). The clash, which saw thousands of buildings burned, followed a police raid on an after-hours nightclub; residents said the rebellion was in response to an overzealous and racist police force.

AFTER/LIFE is part of a dual performance at Links Hall, paired with “The Living Lakes.” Set in 1915- 1935, “The Living Lakes” tells the work and cultural history of Latino and African American communities in Chicago and Detroit.

Dr. Biggs, an actress, playwright and performance scholar, serves as an assistant professor in the Residential College in the Arts and Humanities at MSU.

Tickets are $10. For more information, go to https://bit.ly/2JemM2q