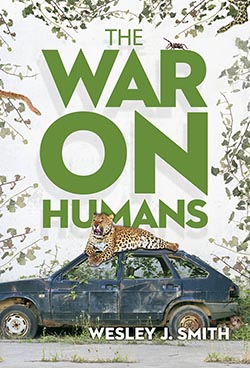 Seattle, WA (BlackNews.com) â€“ Are humans the enemy? Should pigs and peas have constitutional rights? The War on Humans, a provocative 31-minute documentary from Discovery Institute exploring growing efforts to disparage the value of humans in the name of saving the planet, will be released online February 18th at www.waronhumans.com.

The documentary features bioethicist and Discovery Institute Senior Fellow Wesley J. Smith, who has authored a companion e-book with the same title that will be released on February 18th by Discovery Institute Press. In the book he investigates the views of anti-human activists who want to grant civil rights to animals, plants, and â€œMother Earth,â€ and who want to reduce the human population by up to 90%.

â€œWestern Civilization, which has brought us so much freedom and prosperity, depends on a worldview that embraces the unique intrinsic value of human life,â€ explains Smith. â€œThat crucial understanding is now under energetic and widespread assault – perhaps most dangerously from the radical environmental movement that not only rejects human exceptionalism, but declares us to be the enemies of the planet. In this view, if we would only see ourselves as one unexceptional part of nature, we will tread more gently upon the earth. But I say that if we redefine ourselves as just another animal in the forest, thatâ€™s precisely how we will act.â€

The book has been praised by author and journalist Nat Hentoff, a noted civil libertarian and free speech advocate: â€œIf there were an international award for continuing to focus on and document cultural and political threats to basic human life and potential – I emphasize human – the winner would be Wesley J. Smith.Â  Smith has now written a riveting expose of this multi-dimensional assault on human beings that for life saving reasons – I kid you not – must be read by human beings beyond their political, religious, and all other affiliations.â€

To schedule an interview with Smith please contact Linda Roney at 214-939-1700, or publicity@spencemedia.com.

About Wesley J. Smith
Lawyer and award winning author, Wesley J. Smith, is a Senior Fellow at the Discovery Instituteâ€™s Center on Human Exceptionalism. He is also a consultant to the Patients Rights Council and a special consultant for the Center for Bioethics and Culture. In May 2004, because of his work in bioethics, Smith was named one of the nationâ€™s premier expert thinkers in bioengineering by the National Journal. Visit Smithâ€™s blog Human Exceptionalism (www.nationalreview.com/human-exceptionalism) hosted by National Review Online.